This week’s Top Ten Tuesday is being scaled back a bit to a Top FIVE Tuesday due to things, so thank you for bearing with me and still stopping by. 🙂

The topic of the week is Books I Wish I’d Read As a Child. As long ago as that was 😂 (not really, but it feels like it), I can’t quite remember everything I read, but there are some recent favorites that I know would have made a world of difference to young Me.

Top Ten Tuesday is a weekly meme created by The Broke and the Bookish and hosted by The Artsy Reader Girl. Upcoming & past topics can be found here.

Percy Jackson and the Olympians by Rick Riordan

The Lightning Thief by Rick Riordan came out when I was twenty. I would have been so excited to have a series like this when I was a kid because I was hugely into Greek mythology at Percy’s age when the only book I really knew about was Edith Hamilton’s Mythology. A perfectly adequate book, but it was more educational, textbook-y, nothing like the adventures that Percy & co. encounter.

Percy Jackson is a good kid, but he can’t seem to focus on his schoolwork or control his temper. And lately, being away at boarding school is only getting worse – Percy could have sworn his pre-algebra teacher turned into a monster and tried to kill him. When Percy’s mom finds out, she knows it’s time that he knew the truth about where he came from, and that he go to the one place he’ll be safe. She sends Percy to Camp Half Blood, a summer camp for demigods (on Long Island), where he learns that the father he never knew is Poseidon, God of the Sea. Soon a mystery unfolds and together with his friends—one a satyr and the other the demigod daughter of Athena – Percy sets out on a quest across the United States to reach the gates of the Underworld (located in a recording studio in Hollywood) and prevent a catastrophic war between the gods.

I Wish You All the Best by Mason Deaver 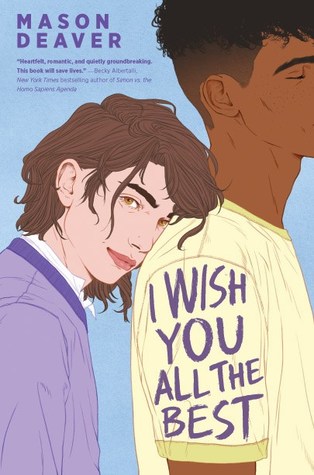 This would have been later childhood, but I really wish I’d had a book like this when I was a teen. There’s a lot of rough times for Ben in this book, but they end up experiencing some things that I would have found both familiar and, perhaps, hopeful. Growing up I didn’t know a lot of things because my environment was very anti-questioning and forced me to remain closeted and even deny thinking about who I was. Finding pieces of myself in I Wish You All the Best by Mason Deaver is something I wish I’d had the chance to do back then.

When Ben De Backer comes out to their parents as nonbinary, they’re thrown out of their house and forced to move in with their estranged older sister, Hannah, and her husband, Thomas, whom Ben has never even met. Struggling with an anxiety disorder compounded by their parents’ rejection, they come out only to Hannah, Thomas, and their therapist and try to keep a low profile in a new school.

But Ben’s attempts to survive the last half of senior year unnoticed are thwarted when Nathan Allan, a funny and charismatic student, decides to take Ben under his wing. As Ben and Nathan’s friendship grows, their feelings for each other begin to change, and what started as a disastrous turn of events looks like it might just be a chance to start a happier new life.

At turns heartbreaking and joyous, I Wish You All the Best is both a celebration of life, friendship, and love, and a shining example of hope in the face of adversity.

Every Heart a Doorway by Seanan McGuire

I was very lost for a long time and had dark periods, especially in middle school. Portal fantasies, or books like Every Heart a Doorway where we find out what happens to children that return from other worlds to this one, were the sort of story that I would have inhaled.

Children have always disappeared under the right conditions; slipping through the shadows under a bed or at the back of a wardrobe, tumbling down rabbit holes and into old wells, and emerging somewhere… else.

But magical lands have little need for used-up miracle children.

Nancy tumbled once, but now she’s back. The things she’s experienced… they change a person. The children under Miss West’s care understand all too well. And each of them is seeking a way back to their own fantasy world.

But Nancy’s arrival marks a change at the Home. There’s a darkness just around each corner, and when tragedy strikes, it’s up to Nancy and her new-found schoolmates to get to the heart of the matter.

No matter the cost.

In the vein of my reasoning for I Wish You All the Best, Let’s Talk About Love by Claire Kann would have enabled me to see representation that was sorely missing in books when I was growing up (so far as I knew from the books that I had access to at the time).

The Gilded Wolves by Roshni Chokshi

Growing up with beautiful characters and settings and a story like this? 😭 Roshni Chokshi has many books under her belt at this point and I’ve sampled many of them, but I think that The Gilded Wolves would have interested a younger Me the most because it had interesting concepts: the searching for lost artifacts, the found family, and so forth. Those elements would have comforted me through a lot of times and as much as they mean now, even more so then.

It’s 1889. The city is on the cusp of industry and power, and the Exposition Universelle has breathed new life into the streets and dredged up ancient secrets. Here, no one keeps tabs on dark truths better than treasure-hunter and wealthy hotelier Séverin Montagnet-Alarie. When the elite, ever-powerful Order of Babel coerces him to help them on a mission, Séverin is offered a treasure that he never imagined: his true inheritance.

To hunt down the ancient artifact the Order seeks, Séverin calls upon a band of unlikely experts: An engineer with a debt to pay. A historian banished from his home. A dancer with a sinister past. And a brother in arms if not blood.

Together, they will join Séverin as he explores the dark, glittering heart of Paris. What they find might change the course of history–but only if they can stay alive.

What are some novels that you would have loved to have read as a kid? Are there some that you can remember loving when you were younger? Let me know in the comments below!

Follow The Hermit Librarian on WordPress.com
Join 2,183 other subscribers