Farah Mirza faced the Architect in The Gauntlet. Now, it is Ahmad Mirza’s turn in this futuristic take on the in-universe game.

The Battle unites Ahmad with Winnie as the pair are swept into a high tech, glittering city where familiar faces and new puzzles will be thrown at them in order to entrap them and gain justice for the Architect.

What an adventure! For fans of adventure books and films like Jumanji and Zathura, The Battle is a continuation of Karuna Riazi’s The Gauntlet series that those who have been waiting for a new entry will surely enjoy. 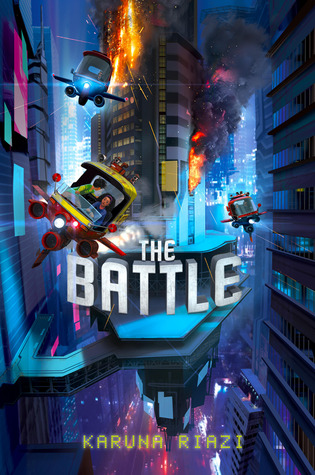 The game begins again in this gripping follow-up to The Gauntlet that’s a futuristic middle eastern Zathura meets Ready Player One!

Four years after the events of The Gauntlet, the evil game Architect is back with a new partner-in-crime—The MasterMind—and the pair aim to get revenge on the Mirza clan. Together, they’ve rebuilt Paheli into a slick, mind-bending world with floating skyscrapers, flying rickshaws run by robots, and a digital funicular rail that doesn’t always take you exactly where you want to go.

Twelve-year-old Ahmad Mirza struggles to make friends at his new middle school, but when he’s paired with his classmate Winnie for a project, he is determined to impress her and make his very first friend. At home while they’re hard at work, a gift from big sister Farah—who is away at her first year in college—arrives. It’s a high-tech game called The Battle of Blood and Iron, a cross between a video game and board game, complete with virtual reality goggles. He thinks his sister has solved his friend problem—all kids love games. He convinces Winnie to play, but as soon as they unbox the game, time freezes all over New York City.

With time standing still and people frozen, all of humankind is at stake as Ahmad and Winnie face off with the MasterMind and the Architect, hoping to beat them at their own game before the evil plotters expand Paheli and take over the entire world.

Scenes of peril, including police figures shooting fireballs at children (the main characters)

The world building was in-depth, from the hints of old Paheli to the futuristic elements that were made to attract new players to the Game. Middle Eastern elements enfuse the city from Madame Nasirah’s tea shop (a familiar feature to returning readers) to architectural touches in the buildings, clothing, and vehicles. The futuristic elements that I liked the most were one of the lanterns that was likened to a lightning bug and a light up cobblestone “yellow brick road”.

The food served to Ahmad and Winnie made my mouth water. From the spinach pies to the tea pot that poured what was most comforting to the individual drinker, there was so many things to delight in.

Winnie’s enthusiasm for the world of Paheli (driving the futuristic version of a rickshaw) and her quick thinking (being suspicious of twitchy characters, thinking through puzzles) made her likeable even against the frustration I had for her.

The book felt like it took off rather suddenly, allowing no time for the reader to bond with Winnie, the new side character who is going on this journey with Ahmad. She’s posed at this person who is meant to be a new friend, possibly even a good friend, but I didn’t feel any kind of connection to her or any kind of reason as to why, as a reader, I needed to care for or about her.

The jacket copy doesn’t quite mesh with how things play out with regards to Ahmad trying to make Winnie his friend using The Battle as a game and it was confusing because I thought maybe my arc was missing a chapter or something, but perhaps it was just poorly worded? I’m not sure, but it does make things a bit awkward when you read the copy and expect one thing and start reading it and get something else.

The trials didn’t feel as significant as in The Gauntlet. The second one especially felt like it was over in the blink of an eye. Pertaining to that (the second task, a labyrinth): there were details, such as moments where one person had a crucial puzzle piece, that got very muddled which added to the confusion. It was like the writing got bumbled or something.

There was also some moments in the action during the finale that made no sense, like everyone was scrambling so fast to get things done that the writing wasn’t concerned with making sense (point a –> point b –> point c, etc.). It was incredibly frustrating because I would reread these sections over and over again, thinking I’d misunderstood, but I’m almost positive these were just threads that weren’t taken care of.

As I mentioned in the previous section section, I liked Winnie’s enthusiasm and quick thinking, but I also don’t think she was as well developed as she could have been. She was only so-so, from the somewhat superficial relationship she had with Ahmad to the journey she went on through the book that ought to have given the reader a deeper understanding and connection with her.

Karuna Riazi has amazing ideas and weaves them into interesting stories, from The Gauntlet and now into Ahmad and Winnie’s tale in The Battle. There were some issues that I had that there frustrating, including scenes that didn’t make sense and lack of character development. Overall, I think the bones of a good adventure are here and could well be enjoyed by readers who picked up the story of Farah Mirza and are now curious about what her brother, Ahmad, can do when facing Paheli.