After seeing the first film and reading the script for Fantastic Beasts and Where to Find Them, I wanted to know what would come next. There were some development that I expected, given the history of the Wizarding World, but then there were many more characters that were totally new. What would be their fate? Did they really survive the first installment? You have to pick up Crimes of Grindelwald to find out the details & answers, so I did. 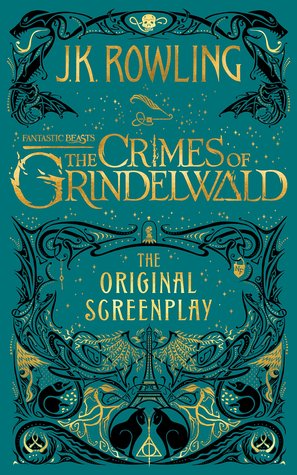 At the end of Fantastic Beasts and Where to Find Them, the powerful Dark wizard Gellert Grindelwald was captured in New York with the help of Newt Scamander. But, making good on his threat, Grindelwald escapes custody and sets about gathering followers, most unsuspecting of his true agenda: to raise pure-blood wizards up to rule over all non-magical beings.

In an effort to thwart Grindelwald’s plans, Albus Dumbledore enlists Newt, his former Hogwarts student, who agrees to help once again, unaware of the dangers that lie ahead. Lines are drawn as love and loyalty are tested, even among the truest friends and family, in an increasingly divided wizarding world.

This second original screenplay from J.K. Rowling, illustrated with stunning line art from MinaLima, expands on earlier events that helped shape the wizarding world, with some surprising nods to the Harry Potter stories that will delight fans of both the books and films.

There were a lot of threads to sort through in Crimes of Grindelwald, subplots and whatnot, some of which were more interesting/important than others. It’s hard to go in-depth with them, considering the spoiler content that would come up. Suffice it to say, there was one main story line that I was particularly interested in (Creedence) and that had some good momentum until the last page.

For whatever reason, there were at least two major changes to Wizarding World canon. One may still turn out to be a falsehood, but as it stands in this book? I’m frustrated because it just doesn’t make sense within the established world. Without any significant spoilers, I’ll say it’s regarding Creedence, his journey into the magical world, and his search for his magical heritage. Creedence is interesting, but I hesitate to say whether the choices made regarding his path will end up being good and just a poor attempt to tie him into established characters’ stories.

Speaking of established characters, this one might be slightly spoiler-y as I talk about their appearance specifically: Minvera McGonagall

McGonagall makes an appearance as a thirty-year-old professor at Hogwarts. Why is this a problem? Well, for one, she shouldn’t be born when Crimes of Grindelwald takes place, much less the flashback she appears in. Second, her inclusion felt like it was only being used in order to tie the Fantastic Beasts series back to Harry Potter. She didn’t bring anything to the story otherwise.

The same goes for Nicholas Flamel in terms of using his appearance to tie things back to HP. From the trailer it looks like the actor will be good, but in terms of substance in the screenplay? Eh, I think he could’ve been almost any other wizard and it would’ve worked just as well.

There are sure to be some wonderful visuals when the film is seen in conjunction with reading the screenplay. MinaLima did a fabulous job with the line illustrations and the written descriptions of creatures and scenes was adequate enough to picture the action.

I wish, though, that there had been more focus on, say, the circus where Creedence met Nagini. There is a tour of the French Ministry of Magic that may well have some amazing shots, such as there were in Fantastic Beasts and the visits to MACUSA.

This screenplay will be good for fans of the series, disappointing as the appointment of certain cast members remains. As a script on its own, there were some developments that didn’t make much sense, characters (such as, you know, the author of the Fantastic Beasts field guide) that weren’t really handled as well as I’d have thought, and missteps regarding established canon.