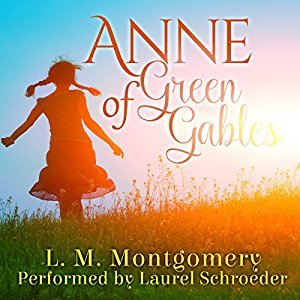 When Anne Shirley arrives at Green Gables farm on Prince Edward Island, she surprises everyone: first of all, she is a girl. Marilla Cuthbert and her brother, Matthew, had specifically asked for an orphan boy. She has bright red hair that won’t manage and a mouth that won’t shut. Nothing will ever be the same at Green Gables!
A favorite story of generations of girls ever since it was first published in 1908, Lucy Maud Montgomery’s classic story of one girl’s profound effect on a small Canadian community has stayed in print for nearly one hundred years and has been made into a popular TV series and even a musical.

Anne of Green Gables is a classic novel that I remember begging to purchase in a Waldenbooks years ago when I was a child. Sadly I cannot remember if I ever did read it; I think I did and I do have that copy on my shelf. Luckily, Jess at Audiobookwork Promotions gave me the opportunity to listen to an edition of this widely beloved tale as part of the Adopt-an-Audiobook Program, for which I’m very thankful.

Laurel Schroeder is the narrator of Spoken Realms’s version of Anne. Before starting this book, I’d never heard her perform before, but now that I have, I would add her to the list of narrators or voice actors that I would be happy to listen to again. The pitch in her voice never reached a level that I found unpleasant, a point that I hold to be very important with audiobooks.

Laurel read very clearly and didn’t mumble at all, also very important. I never strained to hear what was going on, even when it was implied that a character might be reserved in their speech. It was easy enough to tell the characters apart, as far as the adults went. I thought that the children, aside from Anne, tended to sound a bit too similar overall.

The sound quality was excellent. There was no scratchiness in the background, no unnecessary musical elements between chapters or added nature sounds that tried to force a sense of setting. The writing and the voice actor did that just fine on their own. Letting these factors shine rather than adding in surplus bits was a smart decision on the part of the production company.

Anne of Green Gables translates very well to an audiobook format. If anything, I think it gains something in the transition because a lot of what makes Anne special is her energy and her fondness for stories, something which someone can imagine, but which can really be enhanced by a good narrator, which Laurel Schroeder was. All the enthusiasm that Anne had for life leaped right off the page and came to life in the air around me as I was listening. If you’re going to listen to any audiobook presentation of Anne of Green Gables, I would recommend this one.

The execution of bringing L.M. Montgomery’s book to life was exceptional and got me to enjoy it quite a lot more than I think I would have if I were reading a physical edition.

Montgomery’s text, I had to remember, was written over a hundred years ago and there were some sentiments that were definitely of the time, especially regarding other nationalities.

The author also tended to wax poetical about nature, particularly flowers. Flowers in and of themselves are nice enough, but it felt like, after awhile, I was hearing about them far too often and I began to tire of the frequent occurrences and the time spent on said occurrences.

Another thing about that I thought I noticed about the writing was that Montgomery tended to tell rather than show, particularly when there were large periods of time to be gotten past. As the reader we didn’t get to experience these times with Anne or her fellows, we just got a passing mention of the months that had passed before the author got to the point she’d really wanted to write about. For example, Anne’s time spent at Queen’s school was hardly mentioned at all, even though it was extremely important to her as a character.

A branching off point to this is that because of the abundance of telling rather than showing, I felt like there wasn’t as much heart to the overall novel as there could have been. Anne is a character that is ready to be in your heart forever and in the scenes where she’s allowed to be herself, she truly exhibits this. As the novel progressed, though, and she spent more time among the people of Avonlea and more time was “told”, it felt like she wasn’t that girl anymore. Oh sure, we were told she was, that she had the old love of stories still, but it felt like her soul was being tramped down to make her respectable in the eyes of the people around her, like she wasn’t really allowed to be herself after all.

The narration performance of Laurel Schroeder makes this book a much more pleasant performance than I think reading the page would have been. I’d recommend buying this Audible version if at all possible if you’re thinking of reading Anne of Green Gables because your experience will be infinitely better. Here’s hoping Laurel will do more in the series of Anne books.