Adrienne Young’s new book, Sky in the Deep, debuts soon. Featuring a strong Viking inspired story, family betrayal, and what it means to be on opposing sides of war, it’s sure to be an intense book filled with battles, emotions, and hard questions.

Today on The Hermit Librarian, courtesy of the Sunday Street Team, I am sharing an excerpt from the new novel.

Raised to be a warrior, seventeen-year-old Eelyn fights alongside her Aska clansmen in an ancient rivalry against the Riki clan. Her life is brutal but simple: fight and survive. Until the day she sees the impossible on the battlefield—her brother, fighting with the enemy—the brother she watched die five years ago.

Faced with her brother’s betrayal, she must survive the winter in the mountains with the Riki, in a village where every neighbor is an enemy, every battle scar possibly one she delivered. But when the Riki village is raided by a ruthless clan thought to be a legend, Eelyn is even more desperate to get back to her beloved family.

She is given no choice but to trust Fiske, her brother’s friend, who sees her as a threat. They must do the impossible: unite the clans to fight together, or risk being slaughtered one by one. Driven by a love for her clan and her growing love for Fiske, Eelyn must confront her own definition of loyalty and family while daring to put her faith in the people she’s spent her life hating.

I broke through the fog and ran toward the river as fast as my feet would carry me with Mýra on my heels, her sword swinging. My eyes were on the trees, in the direction Iri had gone. They jumped from shadow to shadow, looking for a streak of flaxen hair in the darkened forest.

A woman leapt from the tree line, but her shriek was cut off as Mýra came from the side, plowing into her with a knife. She dragged it across the woman’s throat and dropped her where she stood, falling into step with me again as I ran.

The retreat whistle for the Riki sounded and the bodies, still tangled n battle, parted to reveal the green field now painted red with the death of clansmen. I took off, weaving through the retreating Riki and grabbing hold of the fair-haired men one by one, searching their faces.

“What are you doing?” Mýra wrenched me backward, her sharp face pulled in confusion.

The last of them disappeared into the trees behind her and I turned, looking for the blue wool tunic my father was wearing beneath his armor. “Aghi!”

The heads of the Aska in the field turned toward me. Mýra took hold of my arm, pressing the heel of her hand into the wound to stop the bleeding. “Eelyn.” She pulled me to her. “What is it? What’s wrong?”

I found my father’s face across the field, where the fog was still pulling up from the land like a lifting cloud.

“Aghi!” His name was raw in my throat.

His chin lifted at the strangled sound and his eyes searched the body-littered expanse. When they found me, they transfigured from worry into fear. He dropped his shield and ran to me.

I sank to my knees, my head swimming. He fell beside me, hands running over my body and fingers sliding over blood and sweat-soaked skin. He looked me over carefully, dread pushing its way onto his face.

I took hold of his armor vest, pulling him to face me. “It’s Iri.” The words broke on a sob. I could still see him. His pale eyes. His fingers touching my face.

My father’s gaze went to Mýra before the breath that was caught in his chest let go of his panic. He took my face into his hands and looked at me. “What’s happened?” His eyes caught sight of the blood still seeping from my arm. He let me go, pulling his knife free to cut at the tunic of the Riki lying dead beside us.

He wrapped the torn cloth around my arm, tying it tight. “What are you talking about?”

I pushed his hands from me, crying. “Listen to me! Iri was here! I saw him!”

His hands finally stilled, confusion lighting in his eyes.

“I was fighting a man. He was about to . . .” I shuddered, remembering how close to death I’d come—closer than I’d ever been. “Iri came out of the fog and saved me. He was with the Riki.” I stood, taking his hand and pulling him toward the tree line. “We have to find him!”

But my father stood like a stone tucked into the earth. His face turned up toward the sky, his eyes blinking against the sunlight.

“Do you hear me? Iri’s alive!” I shouted, holding my arm against my body to calm the violent throbbing around the gash. His eyes landed on me again, tears gathered at the corners like little white flames. “Sigr. He sent Iri’s soul to save you, Eelyn.”

“Iri’s made it to Sólbjǫrg.” His words were frightening and delicate, betraying a tenderness my father never showed. He stepped forward, looking down into my eyes with a smile.

“Sigr has favored you, Eelyn.”

Mýra stood behind him, her green eyes wide beneath her unraveling auburn braids. 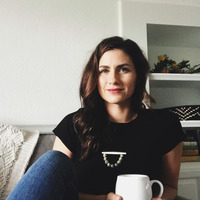 Adrienne Young is a born and bred Texan turned California girl. She is a foodie with a deep love of history and travel and a shameless addiction to coffee. When she’s not writing, you can find her on her yoga mat, scouring antique fairs for old books, sipping wine over long dinners, or disappearing into her favorite art museums. She lives with her documentary filmmaker husband and their four little wildlings beneath the West Coast sun.

Review – Life of a LIterary Nerd

Review – Library of a Book Witch

Review – A Thousand Words and A Millions Books

Review – A Book and A Cup of Coffee