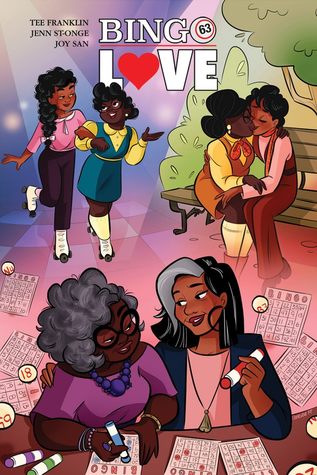 When Hazel Johnson and Mari McCray met at church bingo in 1963, it was love at first sight. Forced apart by their families and society, Hazel and Mari both married young men and had families. Decades later, now in their mid-’60s, Hazel and Mari reunite again at a church bingo hall. Realizing their love for each other is still alive, what these grandmothers do next takes absolute strength and courage.

From TEE FRANKLIN (NAILBITER’s “THE OUTFIT,” Love is Love) and JENN ST-ONGE (Jem & the Misfits), BINGO LOVE is a touching story of love, family, and resiliency that spans over 60 years.

Hazel, or Elle, and Mari meet during a time when it’s was especially difficult to love someone of the same gender. Despite this, a relationship is kindled between the two that sets the foundation for a lasting connection that spans decades.

There’s a lot of questioning going on in the story, particularly for Elle in her later years, as she decides what to do regarding her husband and family of over fifty years when Mari reappears in her life. The situation is a difficult one: what to do, what to say, how to handle her own feelings versus those of the people around it. Some scenes are more difficult to read than others because I felt a stomach pinch, sympathizing with Elle as she debated these paths.

We don’t see too much of Mari’s side of the story, whether she struggled with questioning her sexuality or her life. There are a few lines when Elle asks her questions about her choice to leave her husband so willingly, but these are next to nothing throwaway lines and we never see him or get any real sense of Mari’s life during her and Elle’s time apart.

There’s some technology mentioned near the end of the story used to cope with what I believe is Alzheimer’s that was interesting, if potentially heartbreaking. The very beginning of the book and the very end are set about twenty years from now, so whether it’s viable or not is questionable, but for the place it had in the story, I thought it worked fine.

There’s something of a bittersweet ending awaiting, though it is well worth any tears that may be shed in the reading.

I received a copy of this book from Image Comics in exchange for an honest review.