Waiting on Wednesday is a weekly event created by Breaking the Spine in which we highlight a title we’re looking forward to reading. You can find their website here. 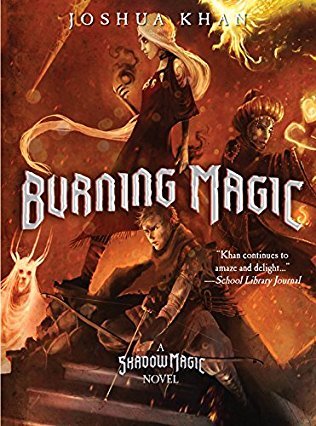 In Book 3, when Lily, aka the “witch queen” and bat-rider extraordinaire Thorn travel to Sultanate of Fire, things go terribly wrong. Instead of celebrating a reunion with their old friend K’leef, they are thrust into royal murder, an epic quest, and a deadly battle for the throne. While investigating the murder, Lily learns shocking truths about her life that could destroy all she has achieved. Yet, among the ruins of her old life, she has the opportunity to become someone greater . . . and more terrifying. Thorn and the magnificent bat, Hades, join the timid K’leef and the idiotic Gabriel Solar in a quest to find a phoenix. These fire birds are the key to saving the sultanate, but they nest within the Shardlands. The boys must defeat not only the monsters of that magical wilderness, but also rivals eager to claim the throne for themselves. Rivals that include a renegade from House Shadow . . . Chilling surprises, ghostly encounters, and belly laughs are just some of the treats in store for readers of this burning-hot desert adventure.

I’ve been a fan of Joshua Khan’s since I first read Shadow Magic, the first book about Lily and Thorn. This being the third book, I am anxious to see what happens to my favorite characters next, particularly since they’re visiting new territory only spoken about previously.

Things can’t be simple though, can they? It sounds like all the danger and adventure of home will be following them as they travel to visit an old friend and are faced with new dilemmas.

I am hoping this won’t be the final book in the series because they’re really fun reads and, since Lily and Thorn are fairly young, there’s always the possibility of following them for many more years/adventures.