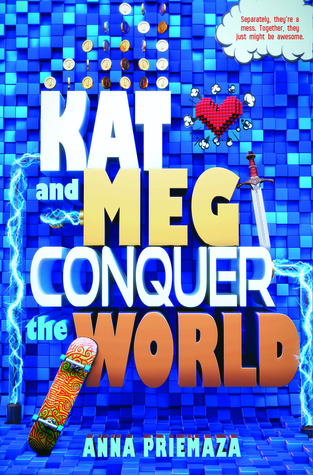 For fans of Nicola Yoon’s Everything, Everything, Emery Lord’s When We Collided, and Rainbow Rowell’s Fangirl, Anna Priemaza’s debut novel is a heartwarming and achingly real story of finding a friend, being a fan, and defining your place in a difficult world.

Kat and Meg couldn’t be more different. Kat’s anxiety makes it hard for her to talk to people. Meg hates being alone, but her ADHD keeps pushing people away. But when the two girls are thrown together for a year-long science project, they discover they do have one thing in common: They’re both obsessed with the same online gaming star and his hilarious videos.

It might be the beginning of a beautiful friendship—if they don’t kill each other first.

“Kat and Meg Conquer the World will hit home for anyone who has ever been waist-deep in fandom, doubt, or new relationships; Kat’s and Meg’s unique voices are outstanding, and their friendship brings this story to vibrant life.”—Francesca Zappia, author of Made You Up and Eliza and Her Monsters

As far as comp titles go, I can loosely see why whoever wrote this one up might see Kat & Meg as a good book for fans of Fangirl (though admittedly the Everything, Everything connection is not as clear to me). There is a lot of love for Legends of the Stone, similar to Cath’s love of the Simon Snow franchise. There are the loose similarities between the main characters, each dealing with a psychiatric or mental disorder that affects their daily interactions with the world and other people (to varying degrees).

I related the most to Kat and understood, I thought, a lot of her frustrations and fears, particularly with her schoolwork. Meg was far from my favorite character. Her exuberance was more than I can handle usually and that made her points of view challenging to read.

I’m not quite sure how I feel about the resolution of Meg’s ongoing conflict with her ex-stepfather. For years she has blamed him for leaving and not claiming any custody of her and while an explanation is given at the end, something to do with lawyers and child support it’s an explanation that suddenly villainizes Meg’s mother, a woman who has struggled at times with Meg but has been a decent enough parental figure throughout the book.

It didn’t sit right with me that the narrative offhandedly did this to her: on the one hand had her working hard to provide for her family, on the other hand made her sound like she didn’t need the child support so that was why Stephen was “excused” from seeking custody of Meg. It makes me more irritated the longer I think about it.

There was also the Legends of Stone convention ending weirdness. It wasn’t the con itself that was weird. Actually, I thought that was represented rather well. What fan hasn’t thought, for one shining moment, that they’d have a special connection with their idol, only to realize that maybe there are just too many people to see in a day for a single person to be remembered? Heartbreaking. 😟

It’s when Kat & Meg are at the airport and have a totally random/weird encounter with their idol, LumberLegs. It made the ending feel, again, random. Disjointed. They were on their way home, fulfilled after a weekend at a con celebrating a treasured game despite the realization that your heroes don’t/can’t always live up to your expectations, then BAM! LumberLegs gets shoehorned in for gods know what reason. It was an odd ending for me.

The premise of the book, the bringing together of Kat & Meg and their science project (an interesting one regarding video game response times before and after consuming sugar), was decent enough but the process of reading it felt bland. I didn’t feel like I was having any fun reading this book. I can see where others might, where seeing Meg explore her interests as they branch off from each other, Kat as her family concerns itself with her grandfather as his health wanes, might work for other readers.

This wasn’t the read for me, though, I’m sorry to say.

I received a copy of this book from the publisher via Edelweiss in exchange for an honest review.