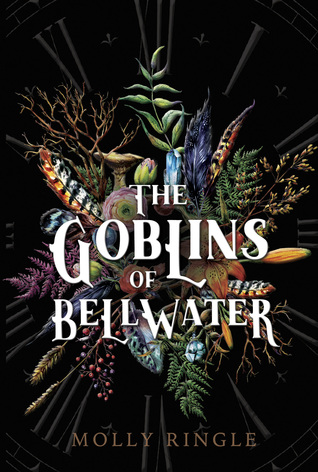 A contemporary romance inspired by Christina Rossetti’s eerie, sensual poem, “Goblin Market.” Four neighbors encounter sinister enchantments and a magical path to love in a small, modern-day Puget Sound town, where a fae realm hides in the woods and waters…

Most people have no idea goblins live in the woods around the small town of Bellwater, Washington. But some are about to find out.

Skye, a young barista and artist, falls victim to a goblin curse in the forest one winter night, rendering her depressed and silenced, unable to speak of what happened. Her older sister, Livy, is at wit’s end trying to understand what’s wrong with her. Local mechanic Kit would know, but he doesn’t talk of such things: he’s the human liaison for the goblin tribe, a job he keeps secret and never wanted, thrust on him by an ancient family contract.

Unaware of what’s happened to Skye, Kit starts dating Livy, trying to keep it casual to protect her from the attention of the goblins. Meanwhile, unbeknownst to Kit, Skye draws his cousin Grady into the spell through an enchanted kiss in the woods, dooming Grady and Skye both to become goblins and disappear from humankind forever.

It’s a midwinter night’s enchantment as Livy, the only one untainted by a spell, sets out to save them on a dangerous magical path of her own.

A haunting story of love, bewitchment, and what a human can do in the face of supernatural forces, The Goblins of Bellwater has the hallmarks of a classic faerie story and a modern darkness that will surely appeal to readers of such books as In the Darkest Part of the Forest by Holly Black.

Kit’s family is cursed to serve a goblin clan that followed his great-grandmother over the Atlantic from France. He bears this burden as well as he can, but when a miscalculation in his tithe leads to the goblins acting out against someone close to him, it’s more important than ever to find a way to break the curse and save not only himself, but his descendants and the residents of Bellwater, Washington.

The very start of the novel, involving what Kit’s life is like and why he has to serve the goblins, reminded me of classic warnings against dealing with faeries of all kinds. Seeing them lure Skye in and how she tries to battle against the “deal” with nearly clever and yet devastating consequences for Grady was a tense time, knowing what’s coming but unable to look away.

About halfway through I noticed that things felt like they were lagging a bit. A lot of scenes started feeling like they were being repeated: encounters between Livy and Kit, Skye and Grady, that sort of thing. There were enough variations in each one to make it seem like things were progressing, but upon reflection I don’t think they really were. It was understood that Skye and Grady were now cursed, I knew from the beginning that Kit was (family obligation to the goblins), and these things kept happening: being reminded of these events, seeing little glimpses of connection, but not much development.

The story did pick back up shortly thereafter, though, and it became thrilling. The revelation of the good fae, the “locals”, and how there’s only one person to save everyone under really difficult conditions, might seem like a typical “good MC saves the world” but it didn’t feel like a rehash. Livy’s adventures, Skye and Grady’s “relationship”, and Kit’s despair was fun to read to the end.

On the topic of relationships, Skye and Grady were a difficult situation and I wasn’t sure how the author would handle it. They have a lot of really intimate moments, but there was the question in the back of my mind as to whether it was a true partnership considering they were under an enchantment the whole time. It did get addressed in parts throughout, with Skye’s thoughts that she couldn’t voice, and resolved at the end when she and Grady were finally able to vocalize what they’d been feeling for the past several weeks and what they’d do now. Was it love, was it real, etc…those were the questions I needed answered because they seemed like they could be great, except for the bewitchment.

With the goblin treachery, curses to be broken, and difficult interpersonal relationships, The Goblins of Bellwater was an enjoyable, well-paced read that reminded me not only of Holly Black stories, but of classic Grimm ones as well.

If you’d like to read Goblin Market by Christina Rossetti for yourself, the Poetry Foundation has it here.

Also,  be sure to check back later today around 12:00 PM EST for a guest post by the author herself, Molly Ringle. In it she talk about her world building and how the goblin world meets our own.