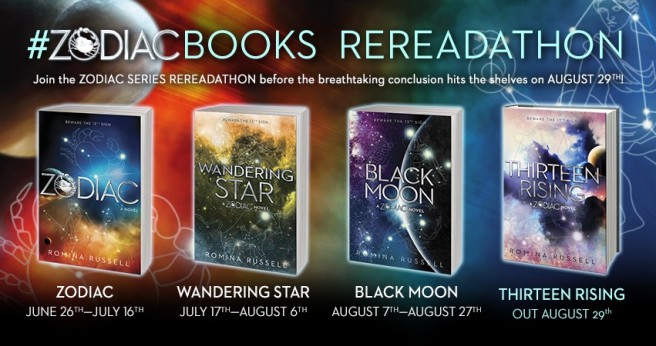 We are SO CLOSE to the release of the final book in the Zodiac series! In a little under two weeks, Thirteen Rising will come out in hardcover and Rho’s final adventure will be released.

It has been a pleasure working on these playlists for Zodiac, Wandering Star, and sharing with you all today, Black Moon. There is a lot more that goes into selecting music for a book that I realized and it can be really hard too. The best course of action was just putting on Spotify for awhile, closing my eyes, and listening to the song radio for a favorite piece and waiting for the right song to jump out at me.

For the most part I’ve been picking instrumental songs because they felt more able to capture the wonder and the terror that the people of Cancer and then the rest of the Zodiac were going through as Ophiuchus/Ochus, the Marad, and the Master inspired fear and wrought their own brand of destruction across the galaxy.

When compiling the music the Black Moon’s soundtrack, I found myself splitting the music into two sections: songs with lyrics for more personal emotions I thought that Rho might be experiencing with her friends or those she loved and songs with instruments along for momentous occasions that encompassed a great number of people in the galaxy. There are times when the lyrics felt a bit more modern and “our Earth” than “Rho’s planet hopping world”, but the underlying feeling was in each of the songs I chose, I felt, and I hope that you’ll see where I was going with the collection I’ve assembled from a variety of albums.

As the final playlist before the release of Thirteen Rising, I wanted to make sure I left nothing out and I hope you’ll enjoy my selections as much as I had listening to them. 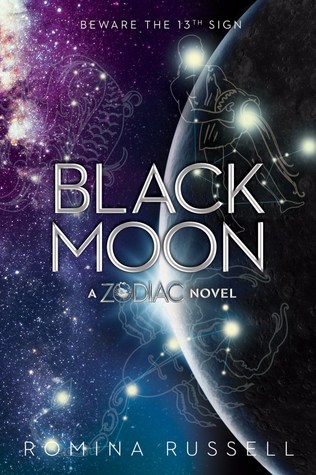 Book 3 in the breathtaking sci-fi space saga inspired by astrology that will stun fans of the Illuminae Files and Starbound series.

One final secret stands between Rho and the enemy. But will the devastating truth be enough to destroy her first?

Rho, the courageous visionary from House Cancer, lost nearly everything when she exposed and fought against the Marad, a mysterious terrorist group bent on destroying balance in the Zodiac Galaxy. Now, the Marad has disappeared without a trace, and an uneasy peace has been declared.

But Rho is suspicious. She believes the Master is still out there in some other form. And looming over all are the eerie visions of her mother, who died many years ago, but is now appearing to Rho in the stars.

When news of a stylish new political party supported by her best friend, Nishi, sends Rho on another journey across the galaxy, she uses it as an opportunity to hunt the hidden master and seek out information about her mother. And what she uncovers sheds light on the truth–but casts darkness upon the entire Zodiac world.

The link above will take you to the Spotify playlist I created. If you don’t have an account, below you’ll find the track list. Please enjoy!