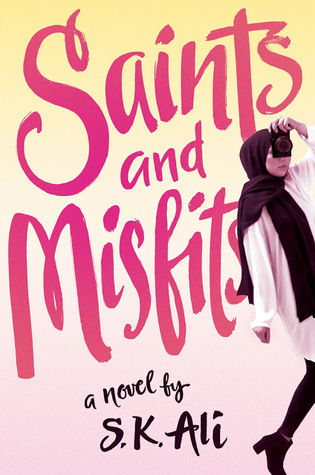 Saints and Misfits is an unforgettable debut novel that feels like a modern day My So-Called Life…starring a Muslim teen.

How much can you tell about a person just by looking at them?

Janna Yusuf knows a lot of people can’t figure out what to make of her…an Arab Indian-American hijabi teenager who is a Flannery O’Connor obsessed book nerd, aspiring photographer, and sometime graphic novelist is not exactly easy to put into a box.

And Janna suddenly finds herself caring what people think. Or at least what a certain boy named Jeremy thinks. Not that she would ever date him—Muslim girls don’t date. Or they shouldn’t date. Or won’t? Janna is still working all this out.

While her heart might be leading her in one direction, her mind is spinning in others. She is trying to decide what kind of person she wants to be, and what it means to be a saint, a misfit, or a monster. Except she knows a monster…one who happens to be parading around as a saint…Will she be the one to call him out on it? What will people in her tightknit Muslim community think of her then?

Saints & Misfits is a stellar debut novel from S.K. Ali, about Janna Yusef, a teenage hijabi with questions about herself, her religion, and her community.

I knew a bit about Islam before going into this book, but reading an #ownvoices novel with a main character talking about her everyday life, the aspirations of the people like her, and the difficulties in reconciling some aspects of Western life with an Eastern religion, made me feel like I wasn’t only reading a novel. I was learning along the way: the difference between a hijab and a niqab, the variety and times of use for a hijab, prayer times, etc.

The sense of community in Saints and Misfits was tremendous, even as Janna struggled with how to deal with an attempted rape by a respected member with the community. Ultimately, the people from her mosque, her family, her friends, they were mostly there for her. There was support for causes, such as Sarah with her ideals for supporting victims of domestic abuse and welcoming in people from the non-Muslim community, like Janna’s friend Tats. Muhammad, Janna’s brother, was also there for her growing up and in the course of the current story, helping her to deal with their parents’ divorce, their father’s confusion over Janna’s decision to be a hijab. There was Mr. Ram, a Hindu neighbor in Janna’s apartment building, that offered her what he could in the way of poetry and jokes, despite her not always paying attention.

There was even Sausun, another Muslim teen like Janna, but who is choosing to wear a face veil as opposed to a simpler head covering like Janna. Though these two had their differences, though Sausun’s personality was harsher compared to Janna, she learned from Sausun how to stand up for herself against the monster that was standing against her, both the literal one she feared no one would believe her about and the one within her: self-doubt, guilt, shame. Each of these people taught her things, taught her what she needed to know in order to become the young woman she is at the end of the novel.

Now, I did find it a little hard to keep up with the timing in the novel. Everything, with the exception of what happened between Janna and the monster, happens in a relatively short period of time. Three weeks, I think, but the day to day transitions were a bit blurry to me.

Janna’s interests weren’t as much a feature of her personality as it seemed they would be from the description in the summary. For a “Flannery O’Connor book nerd”, I can’t think of more than​a couple of times that she or one of her books was mentioned. The same goes for her interest in photography. It only matters in one instance of taking pictures for her Amu and then any other pictures taken are hardly out of the ordinary for a teen with a cellphone. I didn’t get the sense, in the course of the novel, that Janna was quite as interested in these things to the extent that the summary made her out to be, which was disappointing because I love books about book nerds.

There was a bit of an open ending regarding the conclusion of the novel and the “solving” of Janna’s problem, which didn’t bother me exactly but did leave me with questions about what would happen to a few characters and in a few situations after the story closed.

S.K. Ali is going to be a writer to watch. This was an enormously pleasing book to read. The writing was smooth and didn’t lag. The characters shared a lot within their community, but managed to have their individual natures push through. I started this on the first day of Ramadan and was somewhat sad to finish it the next day because it meant that there was no more of Ali’s writing to read for now. Here’s hoping another book is forthcoming and soon!