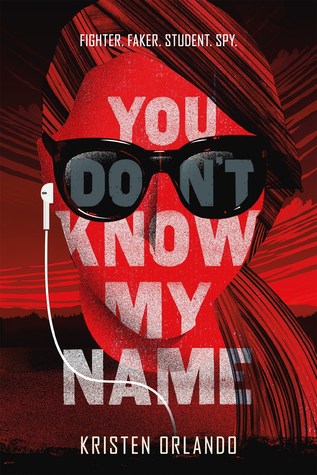 Seventeen-year-old Reagan Elizabeth Hillis is used to changing identities overnight, lying to every friend she’s ever had, and pushing away anyone who gets too close. Trained in mortal combat and weaponry her entire life, Reagan is expected to follow in her parents’ footsteps and join the ranks of the most powerful top-secret agency in the world, the Black Angels. Falling in love with the boy next door was never part of the plan.

Now Reagan has to decide: Will she use her incredible talents and lead the dangerous life she was born into, or throw it all away to follow her heart and embrace the normal life she’s always wanted? And does she even have a choice at all?

Find out if you are ready to join the Black Angels in the captivating and emotional page-turner, You Don’t Know My Name, from debut novelist Kristen Orlando!

You Don’t Know My Name was a fast paced thriller that was well written and engaging. Usually the situation that Reagan finds herself in, that of a teenager being a super spy, isn’t very believable, but except for a few flaws, I thought that Kristen Orlando did a good job of weaving a world in which this wasn’t such a weird occurrence and made it sound quite plausible.

I did have some issues that stuck out to me that weren’t a huge problem overall, but were little things that bugged me throughout the course of the story. The first: as well as Kristen Orlando wrote about a Black Angel operative being raised from birth, I feel like there are a lot of holes that could be poked in this. Is Reagan really the first to ever question whether she actually wants to do this? She’s supposed to be some kind of wunderkind, sure, but it felt a little weird that it was assumed that no child would ever rebel against CORE (the Black Angel organization).

Second: it’s distinctly mentioned in the book that Reagan has a pistol concealed in the back of her jeans before leaving to get on a plane. Once she’s arrived in the new location, she stills has this gun. How on Earth did she get on a commercial airliner with a pistol? There was never an indication that she had a concealed weapons permit that would allow her to do so, which I think would’ve been an easy enough thing to slip in considering she was already traveling as an unaccompanied minor (unless she had fake i.d. that said she was older? Again, that part’s glossed over).

Third: Again, the writing was really fast paced and I think that’s what kept me from truly realizing that it wasn’t until about 46% of the way through that anything really happened. The main threat being introduced, etc. Most of the first part was going over Reagan and whether or not she was cutout for this line of work. It was an important discussion, but it took a lot longer than I realized and I just don’t think it needed that much going over, especially with the ending being what it was.

I’m very curious to see what the next book will be like. Considering Reagan’s stance on joining the Black Angel agency throughout most of the book and the ending, I think things have changed a lot for her. I’m rather sad about that because she’s not being able to make the choices she wanted, but her life is being determined for her by the events that are a result of the Black Angels. Will she be able to escape her “destiny” in the future? What will happen regarding Torres, the big bad of You Don’t Know My Name? There are more than a few questions I have at the end of  this adventure and I can’t wait to find out more.